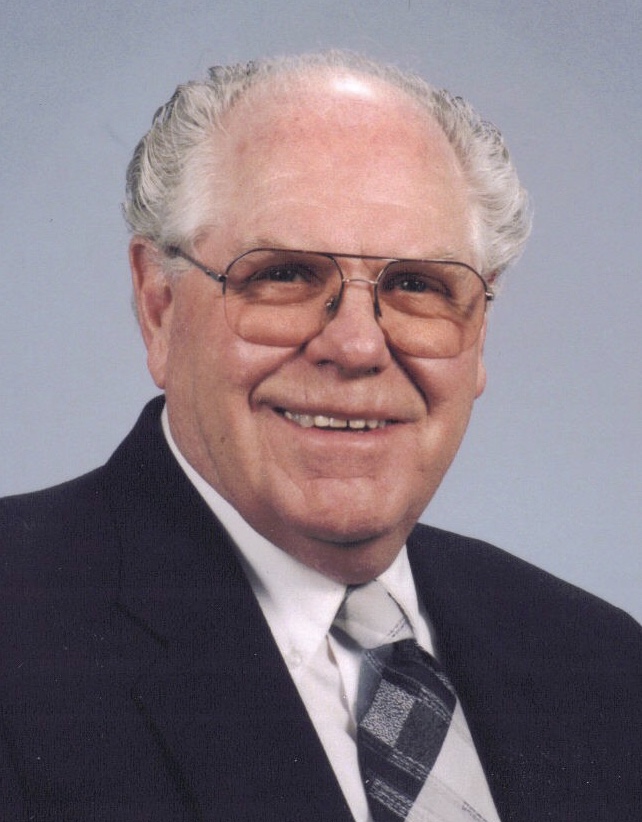 After a long, remarkable, productive life, Harold “Pete” Godtland died peacefully at the age of 95 in the loving embrace of three of his daughters. Pete Godtland was a pillar of the Butte community and dedicated his time and talents to many city projects including the Mother Lode Theatre renovation, the Spirit of the Columbia Gardens Carousel construction, the Food Bank, Gold Hill Church and he designed the entrance arches to Montana Tech, the World Museum of Mining, Stodden Park, and the Ulrich-Shotte Nature Trail.

Pete was born September 20, 1925 in Butte Montana with his twin sister Anna, and the premature babies were born at home and placed on the door of a woodstove for warmth. Parents Ole and Ragna Godtland both immigrated from Norway, met in Montana, and had two other sons, Ralph and Palmer. The family was proud of their Norwegian heritage, ate traditional Norwegian foods and spoke Norwegian at home. In 1936, the Godtland family helped build the Gold Hill Lutheran Church, a spiritual home that Pete attended all his life. The church was an important part of his life, as he met his beloved wife Carol Christman there, sang in the church choir, and dedicated many hours in service of the church and congregation.

The Godtland household with very musical and mother Ragna played the guitar while the children sang along in Norwegian. Pete took piano lessons, but eventually took up the trumpet, which was chosen to help push in his buck teeth. He excelled on the trumpet and played in both band and orchestra, playing first chair in both during his senior year.

Pete was drafted into the army in 1944 at the age of 18, fresh out of high school. He was sent to Okinawa and fought in often harrowing combat until World War II ended. Afterwards, he was recruited to play in the army band, but since there wasn’t a need for trumpets he was asked if he could play baritone, to which he quickly agreed, even though he hadn’t studied it before. The rest of his service time was with the band, touring in Korea, playing for troop parades and officers dances, and working as the music librarian for the band.

When Pete returned from the war he decided to go to college on the G.I. Bill. Since he wouldn’t be home until after classes started, his sister Anna signed him up. Because Pete was so artistic, his sister decided to sign him up for architecture. It was a field that he loved and he used his artistic talents in so many ways. During college at Montana State he continue to play music, often playing in dance bands.

After graduating, Pete, Eldron Moyle, and Charles Kestle all worked together as architects for the Anaconda Company. After two years, Pete decided to go out on his own and became a self-employed architect. He designed offices, schools, houses, nursing homes, roofs, churches, jails, and playgrounds all throughout southwestern Montana. Pete also did volunteer work with many Butte projects, including the Archives Building, the Carousel Museum, the Mining Museum, the Mother Lode Theatre, and many others. Several family and friends had beautiful, stylish, functional homes designed by him too.

After graduating and returning to Butte, Pete continue to play music, and in 1950 was one of the founding members of the Butte Symphony. After playing French horn for 65 continuous years, the Butte Symphony organization established a Concert Master Chair in his honor. Pete continued to play French horn until he passed, and he was also Grand Marshal representing the orchestra in the Fourth of July parade in 2013 with Ruth Rotondi and Luis Milan. He also played in the Butte Community Band for many years.

Pete and Carol were engaged on Valentines Day, married September 12,1954, and celebrated their 65th wedding anniversary last year. Carol was also a musician, and they passed their love of music along to their daughters with piano and string lessons, singing in the children’s church choir, playing in the high school orchestra, and the Butte Symphony. That legacy has continued into the next generation of grandchildren singing in choirs and playing musical instruments trumpet, piano, violin, viola, and harp.

Artistic and creative, Pete was always crafting something and his love a Butte was often reflected in his artwork. Copper was among one of his favorite mediums and was incorporated in many of his pieces, including a gallery of framed historical figures and wire sculptures. Painting was a pastime he enjoyed, especially on rocks and canvas that depicted scenes of old Butte mines. He liked clay sculpting and designed a commemorative plate in honor of the original Columbia Gardens, as well as several others. Pete loved mining Montana sapphires and learn to facet the gems, crafting them into jewelry for family and friends and incorporating them into small wire trees.

Pete was a true patriot and proud of his country. Later in his life he became active in local veterans organizations and played taps on his trumpet for dozens of veterans funerals, as well as at local cemeteries on Memorial Day and Veterans Day in all weather conditions. He was humbled to be part of the Big Sky Honor Flight to Washington DC in 2013. His love of service and music were part of that trip where he gallantly played his trumpet at an Honor Tour ceremony. He showed his love and respect for his fellow local soldiers by attending and playing “Taps” at memorial services and patriotic events. In March 2019, US Representative Greg Gianforte presented Pete with the Montana Congressional Veteran Commendation.

His friends and family remember Pete as being kind, generous, dignified, optimistic, smart, and funny. His quiet sense of humor made everyone laugh and his selfless service to the community is an example to everyone.

The Godtland Family wishes to express their gratitude for the excellent care given at Big Sky Senior Living and St James Hospital. Please send memorials to Gold Hill Lutheran Church, the Butte Symphony, and the United Veterans Council.

A memorial service celebrating Pete’s life will be held at 2pm on Saturday, June 26, 2021, at the Mother Lode Theatre, 316 West Park St. in Butte. Pete will be laid to rest along with his wife, Carol, at Mount Moriah Cemetery during a private graveside service with Military Honors.
Please visit below to offer a condolence or share a memory of Pete.

Axelson Funeral and Cremation Services has been privileged to care for Pete and his family.