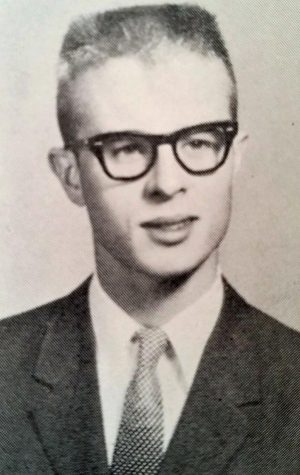 Martin Vook passed away at his home this last Wednesday after a short but valiant struggle with lung cancer. Marty was born in Helena, Montana on December 16. 1944, the first son of Mathew S. and Mildred L. Vook of East Helena. The neighborhood Marty grew up in had six girls and no boys his age so throughout his school years he learned to be popular with the girls to the detriment of his studies. During his childhood he learned to hunt and fish from his Dad and later taught his younger brothers and his own children. He had several different jobs including working at a service station and caretaking at the East Helena Cemetery. He played all sports but was exceptionally talented at baseball. At age16 he was batting .540 in the B League when he suffered an accidental gunshot wound that nearly took his life. He frequently commented that he had been living on borrowed time since then. Unable to do sports he spent the rest of his high school years hanging out with Murphy or Heady and chasing girls. He and his long-time neighborhood friends won grand prize at the Vigilante parade with their float portraying Lewis and Clark meeting the Mandans, he was York. He had little interest in school but was able to graduate from Helena High School class of ’62.

Through physical therapy and hard work, he was able to regain enough strength in his right arm to work at AS&R for a couple of years and enlist in the U.S. Army at age 20. He was trained as an electronic specialist and stationed in Germany. It was there he met his first wife, Michelene. They had two children together- Stephen and Chantal. He received an honorable discharge from the Army and returned to East Helena and worked at American Chemet and briefly attended Carroll College. The family later moved to Butte where he worked as a cable installer and sometimes and uninstaller.

While he was in Butte, he started riding with Bruce and worked hard to attain his dream job of being a Game Warden, which he was able to achieve without a college degree. He worked out of Billings for a couple of years before being permanently stationed in Butte where he remained warden until his retirement in 2007 after 32 ½ years. In 1995 he received the Medal of Valor for saving a man’s life on the Big Hole River.

While in Butte, he and his wife adopted three foster children, Michan, Blaine and Blair. Martin and Michelene later divorced and in August. 1983 he married his “Forever Wife” Cindy. He adopted her sons, Mike and Chris. He became a certified scuba diver and participated in numerous search and recovery operations. He also dove at Truk Lagoon. He obtained his private pilot license. He and Cindy traveled throughout the country.

After Retirement he did considerable improvements around his home. He loved taking his boat to Canyon Ferry and Georgetown Lake to fish. He still hunted but in the later years was more interested in getting out in the woods than killing an animal.

He is survived by his wife Cindy, his children and grandchildren, brother Randy and sister Lois of Helena and brother Jim of Pocatello and several nieces and nephews, mother-in-law Jackie, brother-in-law Dale. At Marty’s direction no services will be held. The family wishes to thank Shamia and Chris from Hospice and his close friends for the help and care they gave over this difficult time. We will miss him greatly while he waits at the Rainbow Bridge for Shadow.

Please see below to offer the family a condolence or to share a memory of Marty. Axelson Funeral and Cremation Services has been privileged to care for Marty and his family.