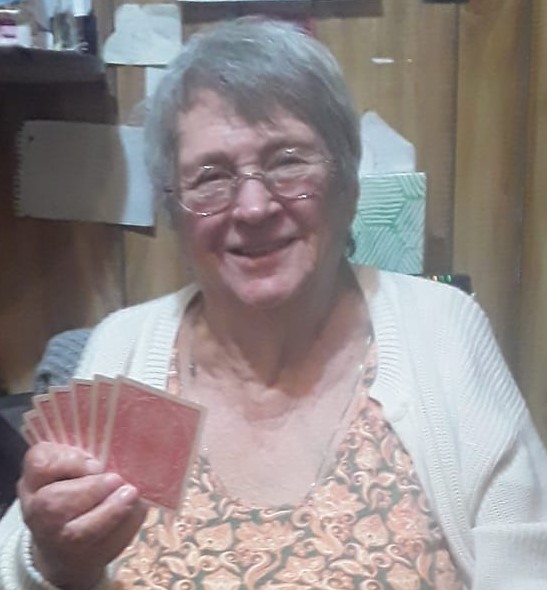 Louise (know as Louise to her family and Martha to others) was born November 30, 1925 in Taunton, Massachusetts. She moved with her parents William and Julia Ann Watts Brown to Montana where she attended schools in Vaughn and Sims. After leaving school she went to work at both the Columbus and Deaconess Hospitals in Great Falls. On April 22, 1950 she married the love of her life, Melvin Trainor and settled in to being a wife and later a “stay at home” mom. The family lived in the Great Falls area until moving to Anaconda in the 1960s. In 1971 she started working at Warm Springs State Hospital and ended her career at Galen State Hospital.

Louise was known as a spunky tell- it- like- it- is woman with a kind and caring heart, willing to help any anyone or any other critter. Possessing a sharp mind involved her in several civic groups. She was part of a committee that worked hard to get the Head Start Program in Anaconda. As well as one of the founding members of the original Anaconda Animal Control Board. They focused their efforts on the humane care and treatment of animals.

But above all her greatest passion was time spent with her family. Her home was the go-to place for all family gatherings. Not only did they gather for the usual holidays, birthdays and etc but most Saturday nights she could be found at her kitchen table involved in a hot game of gin rummy. Her lively sense of humor made people laugh and she wasn’t afraid of telling a few naughty jokes. Her own infectious laugh will be greatly missed.

Louise kept her mind active by reading; mostly mysteries and newspapers and watching TV mostly the news and classic TV. She also watched the political news and liked nothing better than a spirited debate where she could discuss and or cuss the latest political shenanigans. Louise also wrote poetry for her own enjoyment but had had a few pieces published and even won the Golden Poet Award in 1989. Music was another thing she enjoyed mostly country and Hawaiian and was often heard singing or whistling. Until arthritis developed in her hands she could also play the guitar.

A Celebration of Life will be held at 1 P.M. on April 10, 2021 at the First Baptist Church, 300 W. 5th St., Anaconda, MT. A graveside service will be held on a date still to be determined.
Donations can be made to your favorite animal rescue group.

Interment will be at Mount Olivet Cemetery in Great Falls, Montana, in the spring.

Please visit below to offer a condolence or share a memory of Martha.

Axelson Funeral and Cremation Services has been privileged to care for Martha and her family.