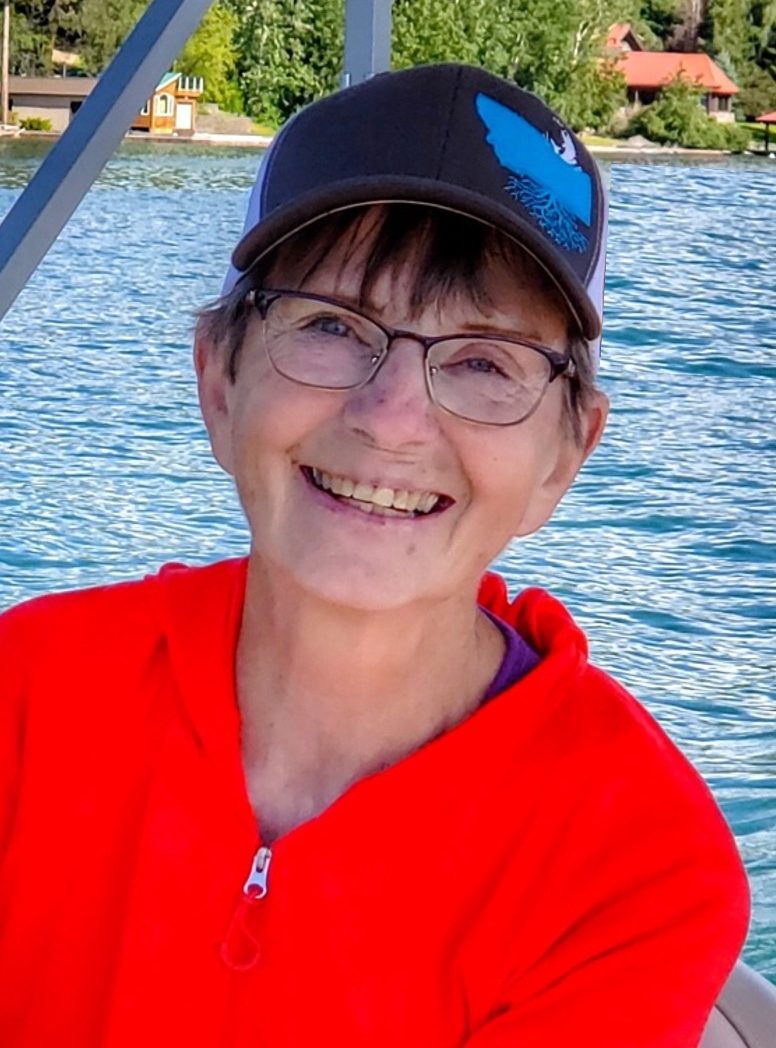 Mabelle Marie Thompson gained her wings and went home to be with her heavenly Father on January 28, 2021, after a courageous battle with cancer. Mabelle was born on February 25, 1938 in Livingston, Montana, to Leaola and Virgil Muir. She was the oldest of three kids and was raised along with her brother Donald and sister Deloris. The family moved to Bozeman in 1949 and in 1954 Mabelle moved to Twin Bridges where she graduated from high school in 1956. Following graduation, her adventurous spirit led her to Billings, where she landed a job at the airport restaurant. Her numerous trips to visit relatives in Deer Lodge sparked her love for the valley, and she moved there soon after securing a job at the local Safeway. She had a blind date with Bill Thompson, Jr. in 1957, fell instantly in love, and married him a short time later. They were married for 37 years and together enjoyed camping, bowling, golfing, snowmobiling, and contributing to the community while raising their six children. She sadly lost her other half in 1994, and their once-in-a-lifetime type of love could never be replicated.

Mabelle was a gifted artist and enjoyed creating in all types of mediums. She studied pottery for three years through the Archie Bray Foundation for the Ceramic Arts. She was always working on some sort of art project – paintings, sculptures, mosaics and more – and often donated pieces to fundraisers, raffles, and other causes. Her art can be found in many places in the community, just look for her signature “MA-“ inside a bell-shape marking. She loved helping area ranchers with their cattle (and giving the seasoned cowhands a run for their money) and was an avid snowmobiler and ATVer well into her 70s. She prided herself on the strawberries and asparagus she lovingly tended every summer in her garden. She helped start the Deer Lodge Art Club and served as president and secretary, she was a regular attendee of Sculpture Group in Drummond, was a member of the Elks Women’s Club, helped start the Back Country Horsemen, and spent 16 years helping decorate trees for the Museum’s Festival of Trees. In her later years she spent time assisting children with art and reading.

If you asked her, she would tell you that her family was her life’s greatest accomplishment. She often reflected on how lucky she was to raise each of her children and how much joy they brought her. Her favorite thing to do was spend time with her grandkids – teaching about Mother Nature, exploring the mountains, and looking for huckleberries, morel mushrooms, wildflowers, yarrow, and historical artifacts. There were many special memories made at the cabin at Rock Creek Lake. She was a competitive game player (and particularly enjoyed when she was winning). She had many special horses and dogs throughout her life, and was especially thankful for her furry companion, Benji, who was trustfully by her side until the end.

Though Mabelle’s strong will and love for the outdoors never faded, her body began to fail her. Her health slowly deteriorated making it more difficult for her to get out and about. If you stopped by for a visit, you would likely catch her reading a book, watching a game show, or finding comfort in God’s word. She was so grateful for the many people who stopped to spend time with her or called to visit.

Mabelle was an incredible matriarch and her family was blessed by her steady presence and iron-willed influence.

She is preceded in death by the love of her life, Bill, parents Leaola and Virgil, sister Deloris Flahave, sister-in-law Betty (Joe) Brand, and brother-in-law Jim Thompson.

Please visit below to offer a condolence or share a memory of Mabelle.

Axelson Funeral and Cremation Services has been privileged to care for Mabelle and her family.