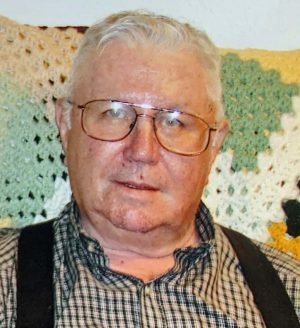 Laurence “Buck” Richard Bruin Sr was born on February 14, 1935 in Mullan, Idaho and passed away on March 3, 2020 in Butte of natural causes.

Buck was the oldest son of Cecil & Nell Bruin.  His family moved to Butte when he was 5.  He attended Monroe elementary school and Butte High. He loved boxing and fought in the AAU State Championships and the Golden Gloves. His Brother Pat said he was one tough son of a gun!  He joined the Marine reserves in 1955 and in 1956 he married his neighborhood tomboy sweetheart Anita Strand.  Working at the Farmers Union Co-op as a mechanic he & Anita welcomed their first child in 1957. In 1958 he was honorably discharged from the marines and he went on to have 3 more children with Anita. They lived in East Butte and he was part of the volunteer fire department. Buck was an avid hunter & fisherman and knew most of the surrounding area like the back of his hand. He tied his own flies and reloaded his own bullets. He played a lot of softball and was one of the mouthiest catchers around (Harassing batters was his special talent). With the Berkley Pit expanding the  family moved onto Nevada Street right up the block from his work.  Buck had favorite spots to hunt, fish, & camp. One spot we loved & camped at many times was Twin Lakes near Wisdom. One camping trip we got in pretty early in the season and had fun building snow tunnels under the picnic tables until a June blizzard chased out of the mountains. After 17 years with the Farmers Co-op he started a new job as a laborer for Safeway Warehouse. When they closed down he then worked for the Boulder hospital until his retirement around 1990.

Buck met Malina Redfern in 1990 and they married in 2000.   He was living with her and extended family at the time of his death.

Malina’s children and grandchildren were a major part of his life over the last 30 years.  We are sure he has special memories with Bill, Sue, Shelly, Doug, Carole, Ron, John, Kathy, Claire, Dan, Lina, Haley, Billy, Johnny, Marissa, Cody, Crystal, Aiden, Nevaeh, & Megan.

Special thanks from his family to the VA, Compassus Hospice & Continental Care and especially Bill Redfern & Nova Bartsch for the care that our Dad received in his last years.

Per his wishes private family services are being held.

Please see below to offer the family a condolence or to share a memory of Buck. Axelson Funeral and Cremation Services has been privileged to care for Buck and his family.