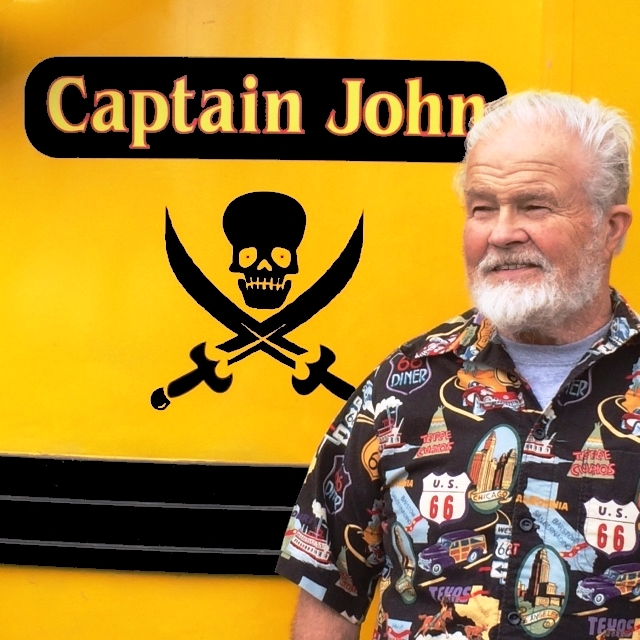 Let it be known that on May 11,2021, the road trip for John Richard Meeks, 76, of Butte, MT, ended due to an internal distributor fault that impacted his horsepower and torque, causing overheating and triggering a stalling condition. He was born on November 8, 1944 to John T. and Betty Jane (Markey) Meeks in Cambridge, Ohio and married the love of his life, Elizabeth Wing Spooner on July 24, 1981 in Bozeman, MT.

John’s employment ran the gamut from a Mobil Oil marketing representative, Gym Manager, IRS Auditor and Instructor and H&R Block Manager, to the owner of the “Custer’s Last Standard” Gas Station in Billings where his slogan was “We will surround you with service.” More recently, he owned and managed Rocker Repair and Tire and was a bus driver for the Ramsay School for close to 29 years.

John was preceded in death by his appendix, several painful kidney stones (good riddance) and his dignity when he got his first colonoscopy. The doctor sure was surprised to read on John’s butt: “DANGER: Exit Only”, which John had his wife write in indelible marker. John used to say he was trapped in a body that continued to age while his maturity level stalled out at puberty.

He was an avid Corvette enthusiast, a skilled race car driver (both autocross and drag), a dedicated weight lifter, a wild downhill skier, a fantastic father, a great card player, and always the most fun person at any party. The Captain Morgan and Diet Pepsi companies are distraught over John’s loss.

John was a first-generation college graduate, earning a BS in Business from Indiana University when he returned from Vietnam. He enlisted in the 101st Airborne of the Army from June 1963 to July 1969. Ever the thrill seeker, he loved jumping out of airplanes, yet he also knew the horror of war and felt he wasn’t patriotically serving his country the way he had envisioned. Later, he refused to forward any rah-rah “support-the-military-no-matter-what” emails as a small demonstration of his anti-war proclivities.

Living in the country brings lots of encounters with nuisance wildlife, but John held a deep reverence for life in all its forms. He live trapped and re-located numerous pack rats, chipmunks, a raccoon (twice), stray cats and, yes, a live skunk. He even rescued a couple of orphaned Bambis and delivered them to the Montana Wildlife Rehabilitation Center. He was most known for his humor, but he’d stop his truck to help a snake cross the road safely.

In addition, he is survived by most of the students who rode his school bus. Connecting with kids was one of John’s superpowers. They loved him dearly despite the signs on his bus that read: “The beatings will continue until morale improves” and “When I die I hope I go quietly in my sleep, not screaming like the kids on my bus!” His students will probably never forget his corny jokes and teasing. A fond greeting he commonly used was “Good morning, my little fart blossom!”

Making others laugh brought him a special joy of accomplishment that only a lively, generous sense of humor can bring. He approached life with an attitude of playfulness and was able to see the fun in everyday experiences. Whether it was answering the telephone with “This is the Four Queens Massage Parlor” (a former brothel in Butte’s days of yor’) or exclaiming “Cool Beans”, John could always find something outrageous, unexpected or silly that we could all laugh at including his 1939 Pirate School Bus that he often drove in Butte parades.

Yet John was deeply spiritual and always closed his annual, humorous Christmas newsletters with a message of love and peace. One of his favorite books was Conversations with God, which he loved to explain to his family. He contributed many hours to the Butte Unity Church and gave generously to Ramsay School fundraisers, 4-H, and to the Lost Creek Raceway. He was a big brother in the Big Brother and Sisters’ organization and supported lots of local causes. He had a generous spirit.

In lieu of flowers, please send a donation to the Butte Unity Church, 300 S. Montana, Butte, MT or perform a random act of kindness in John’s name.

Everyone is asked to wear a funny T-shirt or Hawaiian shirt to a Celebration of Life service to be held at 3:00 pm on Saturday, July 31 at the Butte Unity Church. Participants will be invited to wear one of John’s many funny hats or a pair of Groucho Marx glasses, which he said he wanted folks to do long before the onset of his Alzheimer’s. The family is grateful for the care he received at the Community Nursing Home of Anaconda where he lived for the last two years.