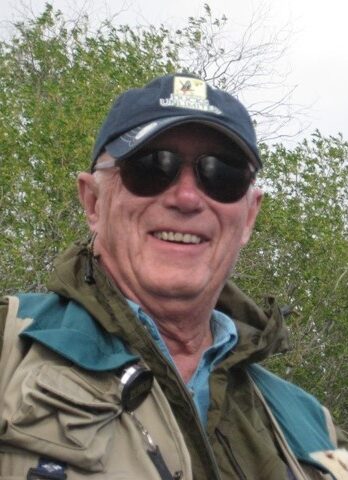 Jim Thompson, a Father, Grandfather, Great Grandfather, mentor and friend passed away peacefully on the afternoon of Tuesday March 1st, 2022 after a short but serious illness.  Jim was born March 13, 1939 in Great Falls, Montana to George and Elenora Thompson.

He grew up in Great Falls, graduating from Great Falls High in 1957. Dad spent 4 and ½ years in the US Navy where he served on the Destroyer Escort U.S.S Eaton(DDE-510), an anti-Submarine vessel.  His ship was part of the US response to the Bay of Pigs Invasion.

After the Navy, Jim attended Montana State University where he graduated in Business Management in 1966.  Upon Graduation, Jim returned to Great Falls to run Thompson Distributing, a state wide poultry and restaurant supply business with his Mother.

Jim met the love of his life, Margie Morris, on a blind date.  After a brief courtship, they were married in Fort Benton, MT. After the wedding, Jim and Margie made their home in Great Falls, MT where all three of their boys were born.  They welcomed their first son, Scott on December 16, 1966, followed by Dan on February 23, 1969 and Mark on February 23, 1974. Jim was a member and president of the Uptown Optimist Club,  and he and Margie made many lifelong friends during their time in Great Falls.  Jim was a visionary businessman, always looking to the future at the same time he was growing the family business.

In 1976, after selling the poultry distribution business and retiring for a short time until he figured out he didn’t like staying home with 3 young children, Jim put into a lottery for the Coors Brewing Company, who was looking for 11 distributors in Montana.  Jim was awarded the distributorship for Butte, MT and moved the family there in 1976. That was the beginning of a 29 year career as the owner of Thompson Distributing in Butte.  A year after starting Coors in Butte, Jim was approached by Ray Reynolds, the owner of the Anheuser-Busch Distributorship in Butte.  Ray told Jim he was ready to sell his distributorship and if Jim could get the money, he would sell it to Jim. At the time, Jim had no money and no collateral.  He was lucky enough to meet a local banker that believed in him enough to grant him the loan on a handshake, making him one of 5 Anheuser-Busch and Coors wholesalers in the country at the time.

From that moment, Jim grew Thompson Distributing to become one of the largest distributors in Butte. He brought all 3 boys into the business at early ages, teaching them to sweep the floors, repair broken beer and everything else about the business as the boys grew up.  Eventually Scott and Mark came back to the business and worked alongside Jim, helping him bring his vision to reality.  A relentless supporter and ambassador for Butte,   Jim brought the Anheuser Busch Support Center to Butte in 1998.  The Center serviced 3 states around Montana, and brought the total number of employees in their family run business up to 45. Thompson Distributing was a huge supporter of the Butte Community, sponsoring everything from Little Guy Football to Softball Teams, to Concerts, to the National Folk Festival, An Ri Ra, and benefits to many to list.

Jim and Margie were founding members of the Butte Community Foundation and founders of the Thompson Family Food Drive in 1989 that continues the First Saturday every December. As a true Bobcat Supporter, including being a member of the President’s Advisory Council at Montana State University, Jim got to see his team play for the National Championship this year.  The memories and smiles created on that trip are unforgettable.  Jim served on the Montana Beer and Wine Distributors board, including a stint as President, and was instrumental in helping write many of the laws that govern distributors in Montana to this day.  Jim and Margie ran Thompson Distributing from 1976 until they sold it to Scott and Mark in July of 2005.  During their 29 years in the industry, they created countless lasting friendships across the country.

Jim’s biggest love (aside from Margie) was time spent fishing at Georgetown Lake at the cabin he an Margie owned there.  You could find him most weekends at the lake, fly fishing, working in the shop or relaxing on the back porch, enjoying a beverage with Margie.  He loved spending time there with his children, grandchildren and great grandchildren.  Jim and Margie’s many friends were also a big part of the joy Jim felt anytime he could get them to the lake.

The family has lost it’s Patriarch, but we are comforted knowing that he is at peace and back in Margie’s loving arms!!!

Jim was preceded in death by his parents, George and Elenora, his brother in-law, Roger Wolter and the love of his life, Margie Thompson.

A Celebration of Jim & Margie’s Lives will be held on their 56th wedding anniversary, Saturday, April 9, 2022, beginning at 4pm, at the Front Street Station, 800 East Front Street in Butte.

In lieu of flowers, memorials in honor of Jim and Margie are suggested to one of the following foundations: Butte Emergency Food Bank, 1019 East 2nd St., Butte, MT 59701; Butte Silver Bow Community Foundation, PO Box 430, Butte, MT 59703; The Don Morris Memorial Scholarship Fund at MSU; or to a charity of the donor’s choice.

Please visit below to offer the family a condolence or to share a memory of Jim.