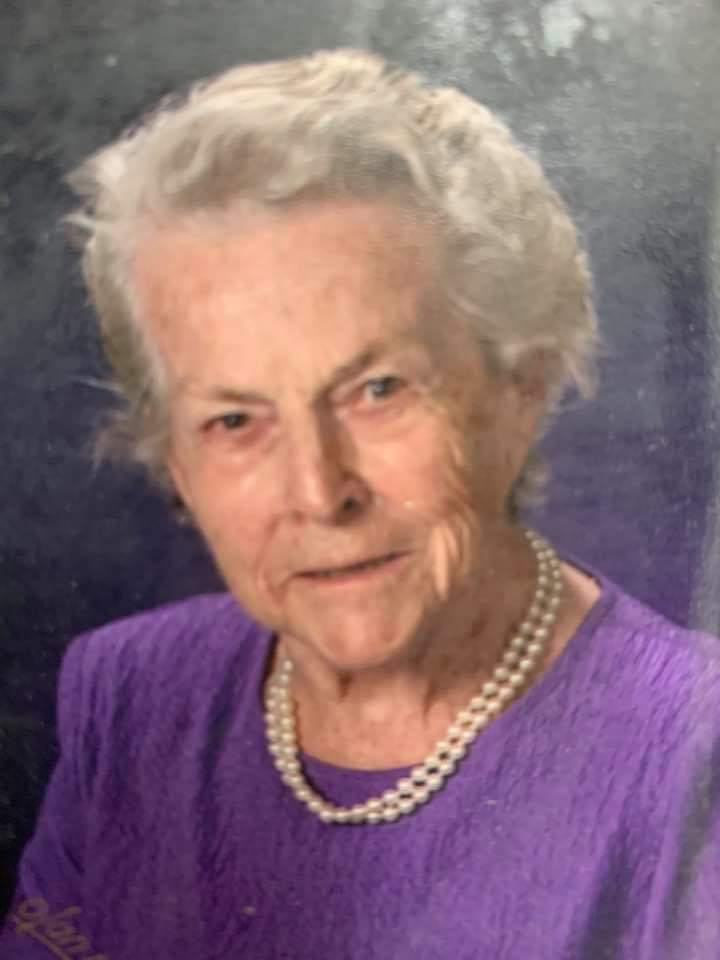 Hazel passed away peacefully with her granddaughter Lynn at her side at Continental Care rest home in Butte, Montana on April 15, 2020.  Hazel was born in Butte, October 19, 1922 to Margaret Miller Jackson and Earle Jackson, the second of seven siblings and the only one to be born in Butte.  She was raised with her other siblings in Mud Lake, Idaho; returning to Butte with her father Earle and five brothers to live with their paternal grandmother following the untimely death of her mother, Margaret. Older sister, Mildred stayed in Mud Lake where she raised her family

Hazel met a dashing ice skater at the old Holland ice rink and was subsequently married to Noel Edwards in November 1940.

Hazel remained a significant part of the lives of her five brothers while her own family grew with the addition of four children, Diane, Douglas, Tom, and Carol.  Hazel provided stand-in nursing duties before her marriage and a wide range of family services after: traffic court for novice driver, Gary; lunch box preparation for bachelor miners Duane and Don; and apprentice electrician Alan.  Hazel enabled Alan to complete high school by providing an alternative home.  Ralph joined the army at eighteen.  Hazel also provided sewing and tailoring services for the clan throughout the years.

Hazel had a wide variety of jobs, beginning as a teenager in the laundry and dry-cleaning business.  After working as a seamstress for Wein’s for many years, she opened her own shop in uptown Butte, Hazel’s Tailoring. Husband, Noel, worked for the BA&P railroad, the Anaconda Smelter and in the Butte mines.  Interspersed in such regular work, primarily when lengthy strikes put Noel, out of work, there was the spud harvest in Idaho, and direct sales of a variety of products. Hazel and Noel were “weekend house-parents” for the Girls’ Home in Butte and later the two of them worked at a home for developmentally disabled in Butte and Dillon. Hazel and Noel enjoyed the friendships they made with other members of the Eagle’s where Hazel served as president of the Ladies Auxiliary.

Although the home family had thinned substantially: Diane married, Douglas left to serve in the military, and both Tom and Carol married, Hazel, always the mainstay of the family, continued to provide needed support to Diane and her six children.

After husband, Noel, sadly succumbed to pancreatic cancer, Hazel split her time between Butte and New Orleans. While in New Orleans she assisted her brother Gary with his restaurant in the French Quarter, and put her tailoring skills to work sewing Mardi Gras costumes.

Hazel was always willing to help her many friends and loved spending time with them. She enjoyed folding bulletins and sewing quilts for Gold Hill Lutheran Church; and traveling with her companions from the church.  She played pinochle regularly for years.

A celebration of Hazel’s life will be held sometime this summer.  If anyone would like to make a donation in her name, she always supported the Shriners and St. Jude.

Please visit below offer the family a condolence or to share a memory of Hazel.

Axelson Funeral and Cremation Services has been privileged to care for Hazel and her family.