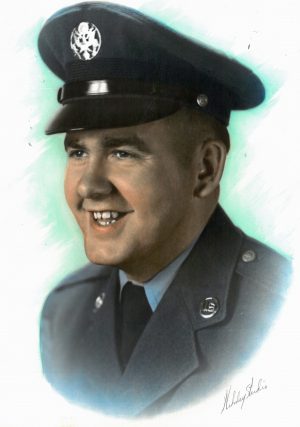 George Henry Curnow, age 91, passed away on October 24 at Big Sky Senior Living. He was born in Butte on May 29, 1928, one of five sons and one daughter of Frederick J. and Esther (Crumby) Curnow. George was a graduate of Butte High and attended Western Montana University. Following in the footsteps of their older brothers, George and his younger brother Frank enlisted in the military on July 13, 1951. George trained as an aviation mechanic and spent his enlistment stateside at a variety of Air Force bases. He was honorably discharged from military service on July 12, 1959, having earned a Good Conduct medal and a National Defense Service medal. All five of the Curnow brothers survived wartime conflicts, leading their mother to call them her “five live heroes”.

When George returned to Butte, he became a U.S. Postal Service Mail Carrier and worked as a residential mailman until his retirement in 1988. During his career, he was recognized numerous times for his outstanding and tireless work ethic.

George was a generous long-time supporter of the Butte Emergency Food Bank, the Salvation Army, and the U.S. Olympic Committee, as well as numerous other organizations. He was a bowler and loved baseball, especially the New York Yankees and he was always up for a trip to Las Vegas.

George was a doting uncle, providing huge quantities of fireworks on the 4th of July and parking his car on Harrison Avenue the night before the Independence Day Parade so the kids would have the best seats. He enjoyed Prince Edward cigars and his nieces and nephews fondly remember being given the cigar boxes to put their jewelry, doll clothes, crayons, and Hot Wheels cars in.

George was a man of few words, but when he did speak, he exhibited a wry, dry sense of humor. His favorite pastime during the past few years was trading verbal barbs with the staff and other residents at Big Sky Senior Living. Everyone who knew him loved his comments and conversations.

George was preceded in death by his parents; older brothers Fred, Vic, and Rob; younger brother Frank and younger sister Lois Jean Curnow. He is survived by his five nieces, two nephews, and numerous great and great-great nieces and nephews.

Cremation has taken place. Interment with military honors will take place at Mount Moriah Cemetery, 2415 S. Montana Street, at 11:00 am on May 29, 2020, in observance of his 92nd birthday.

Following George’s example of generosity in giving, his family is requesting that memorial donations be made in George’s name to the Butte Emergency Food Bank, 1019 E. 2nd Street, Butte, MT.

The family would like to express heartfelt gratitude to the Staff of Big Sky Senior Living for the loving care you provided our Uncle George in the four years that he was a resident. You were not just his caregivers—you were his friends, and your love and concern for him were evident through every conversation with him (indulging him and trading verbal barbs), every action performed, and decision made in his best interest. We will forever be indebted to you for providing him with a high quality of life.

We would also like to thank the staff of Frontier Home Healthcare and Hospice for the support and guidance you offered us through a very difficult time. You went above and beyond to keep our far-flung family apprised of his status through his final weeks, and we are enormously grateful.

Because of the people mentioned above, we are reminded of the goodness that still exists in this world.

A graveside service with military honors will be held at 11 AM on Friday, September 4, 2020, at Mount Moriah Cemetery on South Montana Avenue in Butte.

Please visit below to offer the family a condolence or to share a memory of George. Axelson Funeral and Cremation Services has been privileged to care for George and his family.