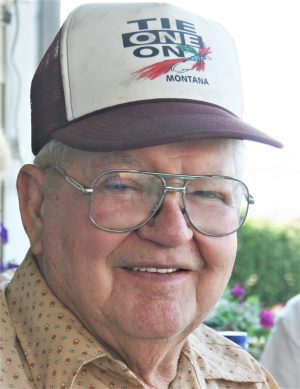 On August 17th, 2019, Eben Alonzo Arends passed away at a Butte nursing home.

Eb was born to Chris and Jenny Arends in Bottineau County, North Dakota on July 21, 1932.  He was the youngest of 10 children.

In 1961, he married Elsie Fosness.  During their marriage they had 2 children.  They lived in the San Francisco Bay Area for over 10 years where Eb worked as a welder for Bethlehem Steel.  They move to Butte in 1972 and later went their separate ways.  Eb was hired as a truck driver for the Anaconda Copper Company where he made many lifelong friends.  Afterwards, he bartended in some of his favorite hideouts.  Once he retired, he spent many good years enjoying time with his family and friends.  He looked forward to his morning coffee and afternoon beer at his favorite casinos where he considered everyone who worked there his friend.

During his retirement, he moved to Utah to be with his daughter.  After his second year, he wanted to go home.  Eb loved Butte; the people, the bars and the cold beers.  When he could no longer drive, he could be seen riding around town on his red scooter.

In his earlier years he enjoyed hunting, fishing, camping and riding motorcycles.  One of his favorite memories was riding in the poker runs with his son Rick.  He enjoyed classic country music, especially George Jones.

Over the last year, Eb regressed back to his younger days and happier times.  In his own mind, he was able to have fun with his older brothers again, go for drives in the Highlands with his brothers-in-law Pete and Randy, and party it up with his best friend Bud.  He was once again able to live life to its fullest.

He was preceded in death by his parents Chris and Jenny; brothers Richard, Harem, Jennings, Arency, Jim, and Chuck; and sisters Dorothy and Irene; and ex-wife Elsie Arends.

The family would like to thank the staff of the Butte Genesis Center and Highlands Hospice who took such wonderful care of him during his final years.

At Eb’s request, no funeral services will be held.  A private graveside service with military honors was held at Sunset Memorial Park in Silver Bow County. Memorials in Eb’s name can be made to Highlands Hospice in Butte.

Please visit below to offer the family a condolence or to share a memory of Eb.

Axelson Funeral and Cremation Services has been privileged to care for Eb and his family.