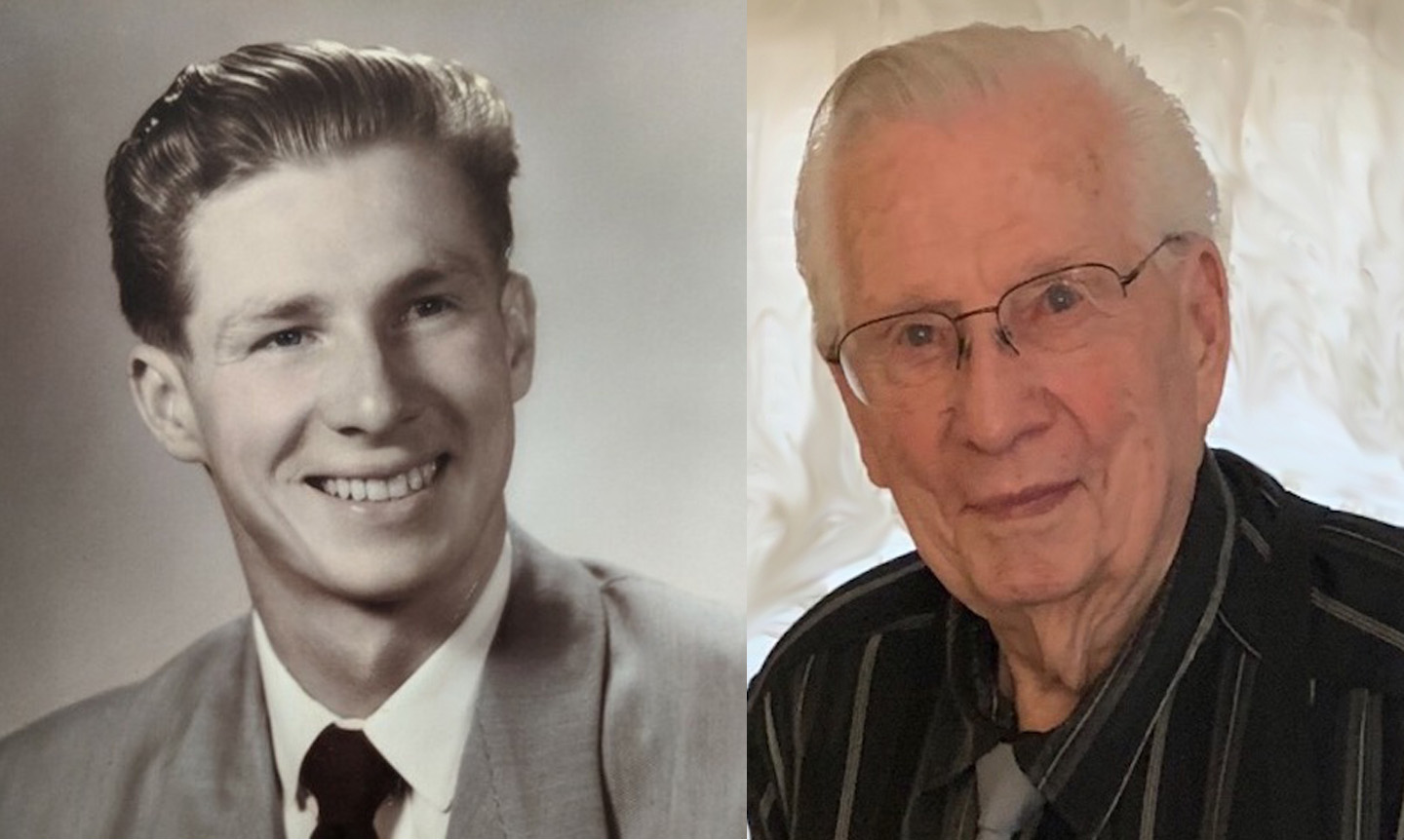 Donald Eugene Heinrichs was born October 5, 1929 in Bakersfield, CA, and passed from this life to be with Jesus, April 27, 2020 in Missoula, MT.

The son of Albert Jacob Heinrichs and Irene Helen Kopper, Don was proud of growing up in the Bakersfield/Fresno CA area in a Mennonite Brethren family. There he learned to love God genuinely, developed a deep love of music as he sang with his brother and sister in church, and spent time with his very large extended family. There, he learned to read music and sing in four-part harmony even as a young child. He also learned to read and write in German and Plautdietsch (Mennonite Low German) as these were the languages of his heritage. Growing up with a deep faith in God, Don developed a relationship with Jesus Christ as his personal savior at a young age. That faith was evident in everything he did and every life he touched.

Don began his education in the Bakersfield area and later, the family moved to Fresno, where he graduated from Fresno High School class of 1947. As a member of Future Farmers of America (FFA), Don planned to be a farmer until he was called into the ministry in late high school. He was a hard worker from a young age, even paying his Dad’s way through college. During their time in Fresno, the family transitioned into the Pentecostal movement where they attended the Full Gospel Tabernacle, with CM Ward as pastor. Don loved music and sang in community groups, church choirs, quartets, and in a trio with his sister, Norma and his brother Howard.

He attended Southern California Bible College, now known as Vanguard University, first on the Pasadena campus and then in Costa Mesa, CA, where he sang in the choir under the direction of Ralph Carmichael, and later under Gaylord Atwell. In 1953 he received a Bachelor of Arts in Sacred Music. To put himself through college, he built wooden boxes for grapes. He stood in the 110°F temperature in the fields outside Bakersfield stapling boxes together piece by piece. And since he was paid per box completed, he became very fast and efficient, making as many as 5000 boxes a day. Following graduation, Don went on a multi-state and multi-province choir tour, where he was the bus driver and member of the choir and quartet along with Armond Morales (later of the Imperials). It was during this tour, under the urging of Armond, that he began dating Marian Mathisen in Chicago, IL. He proposed nine days later, on the organ bench of Calvary Church in Winnipeg, Manitoba, Canada.

Marian returned to California to finish college while Don when back to Winnipeg to begin his career in music ministry. They married on February 6, 1954 and have been gloriously married for 66 years.

Always a team, Don and Marian began sharing the love of Jesus together in San Fernando, CA, as music and youth ministers. They next ministered in Eugene, Oregon where they were music and youth pastors and where Marian was director of the kindergarten.

Marian brought Don to God’s Country, Montana, in 1955 when their ministry then took them to Butte, MT, where they were music and youth pastors at the Assembly of God. This is where they welcomed the birth of their first son, Randy in 1956. Don fell in love with Montana. Marian’s dad taught him to hunt outside of Whitehall. Don enjoyed hunting (but not fishing) but loved the time he got to spend with George Mathisen (his father-in-law) out in the hills. He loved to drive out in the mountains and saw any road, maintained or not, as one to be explored. With four-wheel drive and a winch (and he often needed both), he set out on many adventures. When family from California or elsewhere came to visit, out into the wilderness he would go to take them on an excursion in the country he loved so much.

Robby joined the family in 1958 after they moved to Great Falls, MT, to be on staff at Central Assembly of God as Music Ministers. The choir performed many special programs throughout the year. There in Great Falls, Don made many dear friends to whom he remained close throughout his life.

A new adventure awaited when they were called to work on staff at North Highland Assembly of God in Columbus, GA. The choir there traveled to and performed in churches in neighboring cities and states. During their tenure in Georgia, their first daughter, Dana was born.

Upon their return to Montana, they settled in Billings where they ministered at Billing First Assembly of God, traveling with the King’s Koral-Aires youth choir inside and outside Montana, nearby states and Canada each summer, and even recording an album. Their youngest, Jana, arrived in 1962.

They returned to Columbus, GA, to continue their ministry at North Highland, but in 1966, their ministry brought them to First Assembly of God (now Christian Life Center) in Missoula, MT. There Don directed the Inspirationals choir, accompanied by Marian, and produced a weekly television program called the Hour of Inspiration. The Inspirationals traveled to and performed throughout Montana and most of the Western States and Canada. Don also briefly attended the University of Montana.

Called to be a full-time senior pastor, Don moved his family to Anaconda, MT, and ministered at the Anaconda Assembly of God where he oversaw the building of a new sanctuary. Also, in Anaconda Don and Marian began a community chorale which performed annually at Christmas and Easter. While there, he also helped plant a church in the rural community of Basin, MT.

A burden was placed on their heart to establish a building for the Assembly of God church in Marian’s hometown of Whitehall, MT, in 1992, which they did until their retirement in 1995.

During their retirement they traveled in their motorhome all over the US and ministered in various churches along the way. They helped establish a church in the California desert community known as the Slabs, assisted the pastor in a church in Salton City, CA and led Hymn Sings at various RV resorts. When back in Montana, they supported several rural churches as interim pastors, including at Cornerstone Assembly, a now thriving congregation in St. Ignatius, and with their musical talents at Canyon Community Church, Coram. They loved spending time at Glacier Bible Camp and West of 60s Camp in Hungry Horse, and Fruitland Bible Camp in Fruitland, WA where they ministered in music.

Don and Marian eventually moved to Missoula in 2011, where they became active in the Golden Heirs and on the worship team at Christian Life Center well into their 80s. Don continued to sing bass several Sundays a month beyond his 90th birthday.

Don loved to connect with people. He would meet someone wherever he went, engage in conversation, and within a short time would discover that they knew the same person or that they were somehow related. There were way fewer than six degrees of separation where Don was concerned. This happened anywhere and everywhere. And he never wanted to leave a conversation without sharing what God had done for him and how a personal relationship with God could change your life for the better.

Their home was always open to anyone, whether a 50-member youth group taking over the kitchen and making impromptu hamburgers or grilled cheese on Sunday evening or crowds of folks hanging out in their cabin at Glacier Bible Camp to fellowship and play games.

Always a great lover of music, Don believed that anyone could learn to read music and sing, no matter how tone-deaf. He and Marian spent hours teaching anyone who wanted to learn to sing, harmonize and worship the Lord in song. No matter what age, he thought of any of his choir members as his “kids.”

Don taught his children to love God, encouraged them to develop a personal relationship with Jesus, and desired that they would be filled with the Holy Spirit. He wanted their lives to show God’s love and presence in all that they did. A favorite saying as they left the house with a group of friends was, “Remember who you belong to.” He was reminding them that firstly we belonged to God, and secondly, they belonged to him and mom. He wanted them to think before doing something stupid.

When asked how he was doing, Don would teasingly reply, “It’s a great life if you don’t weaken.”

Blessed with an abundance of great-grandchildren, whom he loved dearly, Don took to calling them all (boy or girl) “George.”

Don also leaves behind a legacy of “kids” other than his own that love Jesus—many of whom have entered full-time ministry in part because of his mentorship and encouragement. These include, but are by no means limited to those of you who have shared this with the family, including, T. Ray Rachels, Dick and Jan Vandeventer, Chuck and Sandi (big sis) Lanes, Dan Mielke, and Joel Niles.

If Don was instrumental in your decision to receive the life of Christ or to enter full-time ministry, please help us honor his legacy by sharing your testimony with Marian and the family. If you like, you can add your testimony or tribute to this website:

Don also had a heart missions, whether at home or abroad and supported missionaries and ministries around the world. He especially carried a deep burden for rural churches and spent many months during retirement as interim pastor to rural congregations. If you would like to honor Don’s legacy, a fund to help Montana’s rural churches has been set up in his name and you can contribute to it here:

or give online at:

There will be a Celebration of His Life at 2:00 PM on Saturday July 11, 2020 at the Christian Life Center located at 3801 S Russel St Missoula, Montana 59801. The church phone number is (406) 542-0353. There will be a time of fellowship following the service. (Guidelines from the health department will be followed.)

Please visit below to offer a condolence or share a memory of Donald.