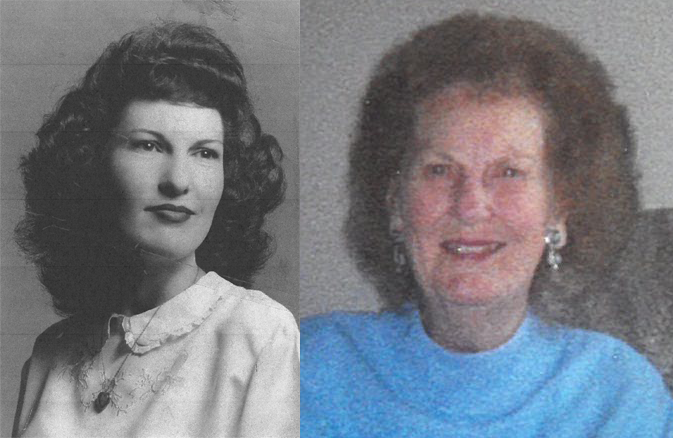 As the sun was peaking over the mountain on January 31, 2021, Dolores M. Gould Martinelli passed away peacefully at her beloved home of 71 years in the presence of her children and a niece.

Dolores was born September 1, 1921 in Spokane, WA to James Harold and Clara (Moe) Gould, the youngest of four children. She came from a strong Norwegian heritage. At the age of nine months, Dolores and her family moved to Butte and she resided there her entire life. Her family and close friends always called her Bebe, the name her two year old brother gave her when she was born because he could not say baby.

Dolores attended Longfellow Elementary School and graduated from Butte High School in 1939. After graduation, she was employed as a secretary/bookkeeper at Butte Tin Shop and worked there for 13 years.

Dolores married Bruno Martinelli July 23, 1949 in the Gold Hill Lutheran Church. Together they had 2 children, Claire Ann and Russ. Bruno passed away on March 24, 2006.

Dolores was very active in volunteer work. During WW2 she and her sister and mother volunteered for the American Red Cross making bandages and was a member of the VFW Women’s Auxiliary. At that time she was also a member of the American Women’s Voluntary Service and two times a week met trains filled with American servicemen and foreign prisoners of war, handing out candy, fruit, and mailing letters for the men. For many years she collected donations for the polio and cancer drives. During her children’s school years she was a Cub Scout den mother, and very active in the Longfellow PTA, and received an honorary life membership pin. She was on the reunion committee for the Butte High class of 1939 for many years and created all the table decorations for each of their reunions.

Dolores attended the Church in the Valley from the time her children were small, and taught craft work to the children during vacation Bible school. She loved life and thanked God for every day He gave her. She also dearly loved her children and grandchildren, extended family and friends, blue sky sunny days, bluebirds, rides in the countryside and picnics, flower gardening, decorating her home, typing letters to family and friends on her manual typewriter, meeting and visiting with people, and doing craft work. She created beautiful crafts of many types, made silk flower arrangements for weddings, and sold her items at bazaars for many years, her favorite being the Serbian Bazaar. For many years Dolores enjoyed baking many fancy Christmas cookies and putting them on trays that she delivered to church, family and friends, dentist and doctors’ offices, and nursing homes. She got so much joy out of giving to others.

Even in adversity her faith was unwavering, and she passed that faith on to her children and grandchildren. She instructed them that no matter what life threw at them, smile more than cry, have a sense of humor, be kind to others, forgive, and never lose your faith in God.

Dolores was so happy to be able to live out her days in her home with help from her daughter. Until recently she could still prepare meals and do light housework. Her mind was still sharp, but her body was worn out.

Dolores was preceded in death by her parents, husband, Bruno, sister and brother-in-law, Eleanor and Omer Ruff, brothers and sisters-in-law , Harold and Louise Gould, and Doug and Lily Gould, uncles Edward and Art Moe, aunt Mamie Duncan, niece, Christine Gould, nephews, Mark Gould, Ted Gould, and Jim Ruff, and grandchildren who were born too soon for Dolores to hold and love.

Many thanks to Dolores’s niece, Amy Gould Alsmady, for coming and lovingly helping to care for her the last 2 weeks of her life. Also, thanks to Dr. Taverna and Cheryl Wegley, Butte Fire Dept., A1 Ambulance, St. James Hospital medical staff, and Frontier Home Health and Hospice for the compassionate care they gave to Dolores.

Cremation of remains by request of Dolores has taken place. There will be a memorial service in the spring or summer when travel is safer and when the bluebirds return.

Jesus said, “Come unto Me, all ye that labor and are heavy laden, and I will give you rest.” Matthew 11:28

Please visit below to offer a condolence or share a memory of Dolores.

Axelson Funeral and Cremation Services has been privileged to care for Dolores and her family.