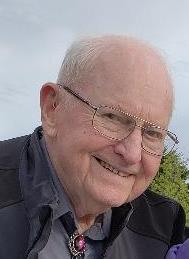 He was born in Philadelphia, Pennsylvania on May 23, 1929 to Elizabeth McGuire Robertson and Thomas Andrews.

David joined the Army in Atlantic City, New Jersey, April 17, 1951, and was honorably discharged April 16, 1953. After his discharge from the Army, David completed his bachelor’s degree in Mathematics at Texas Tech University in Lubbock, Texas in 1955; soon thereafter he became Co-owner of the Varsity Bookstore in Lubbock until the early 1970s.   While in Lubbock David was active in the Optimist Club and was a founding member of St. Christopher Episcopal Church. He was a member of Woodstock Lodge No. 491 F. & A.M. in Alameda, CA. In 1982 David accepted the position of Bookstore Manager at Montana Tech in Butte.  He retired from there in 1996 and became a sales representative, traveling to college bookstores in Montana and Idaho. He also worked at Walmart in Butte for short time, and finally retired for good in 2006.

David was an avid bowler all his life and bowled right up to a month before his death.  He was an active member of St. John’s Episcopal Church and The Gideon’s International, Butte Camp. He especially enjoyed entering bowling tournaments in which he was sure he would one day come in first place.

Each spring David looked forward to visiting his son Jim and daughter Anita in Lubbock. He loved Anita’s dogs and had many stories to bring home about their antics.  His son Jim expressed, “He was a great dad who took us to Indian Guides and Cub Scouts and tried to raise us right.  When we were older, we played handball until it started messing with his bowling (we couldn’t have that) so we switched to racquetball.  Later in years because of an off-hand remark from Dad that it would be fun for me to meet him in Vegas for the National bowling tournament, a new tradition was born.  After that we managed to take a trip of some sort every year except for one.  I will miss the time with him. He made every one of us feel that we were his favorite child.”

Anita was already busy arranging travel plans for this spring for her Dad.  She reflected, “I always looked forward to Dad’s visit every spring.  He is the one person that would play cards with me as long as I wanted to.  He was always up for a game of cards.  He would tell his stories of adventures throughout his life and no matter how many times I had heard them, they made me laugh.  Dad’s graciousness, good humor and love of people inspired me to be a better and braver person. Dad could talk to anyone and would strike up a conversation with everyone he encountered.  He never shied away from learning what he could about the new friend he just met.  When I think of Dad I think of cards, laughing until we cried, bowling, cowboy boots, stories, more laughter and a lot of love.

David always made time to call his children and would talk on the phone for an hour or so with Tom. On Saturdays when he watched Texas Tech football games, he would call Tom and discuss the game play by play.  Coming from Texas, he was also a big fan of the Dallas Cowboys.

He was preceded in death by his Parents; son, David Scott Andrews and stepson, Robert William Williams.

He will be remembered as a kind, loving man who loved his family dearly.  He had quite a sense of humor always cracking jokes.  Recently he was overheard saying to Tom that “I didn’t think I’d live to be 90. I think I have outlived my expiration date.”

A memorial service will be held in his honor at St. John’s Episcopal Church on Saturday, February 1 at 11:00 am.

In lieu of flowers, memorials can be made to The Gideon’s International, St. John’s Episcopal Church, or to the charity of your choice.

No farewell words were spoken,
no time to say goodbye, you were
gone before we knew it, and only
God knows why.

May you find comfort in the arms of an angel.

We love and miss you,
Your family

Do not stand at my grave and weep

I am not there. I do not sleep.

I am a thousand winds that blow.

I am the diamond glints on snow.

I am the sunlight on ripened grain.

I am the gentle autumn rain.

When you awaken in the morning’s hush

I am the swift uplifting rush

of quiet birds in circled flight.

I am the soft stars that shine at night.

Do not stand at my grave and cry;

I am not there. I did not die.