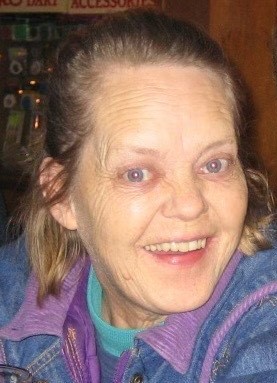 Carol Jean Wyant was born December 6, 1951 to Margaret and Milton Morley. She joined a large family which included Jim, Jack, Kathy, Marvin, Tim, Fred, Dave, Jimmy John and Rob. On January 27, 2021 she slipped peacefully away after suffering for many years with a variety of health issues.

She married Joseph Wyant on December 27, 1969. That union was blessed with two children – Robert Joseph and Victoria Francis. Although Jeannie and Joe later divorced, they were united as parents in raising their children and remained lifelong friends. Jeannie loved being a grandmother to 9 grandchildren. Our Jeannie was also a wonderful aunt to many nieces and nephews.

Throughout her life, Jeannie was stubborn enough to win every argument, which included never calling her Carol. Only Jeannie would do! She would tell you the truth even if it hurt. She was stubborn to her last and was able to live alone in her final years in spite of her numerous health struggles, her loss of hearing and her loss of sight as well.

Her caring and generous nature kept her busy especially with a Christmas gift list that took her all year to fill. She was always ready to sacrifice herself to help others. She was an avid seamstress in her younger years and made clothes and costumes for family and friends. Time ravaged her hearing, robbed her of her eyesight and arthritis slowed her abilities to use her hands. She always was glad to have company come visit. She’d invite you in to talk with the tv volume up as high as it would go and every light in the house turned on. She would happily be listening to Hallmark movies or Turner Classics.

Her jobs in her younger years included the Anaconda Police Department and Circle K. Jeannie worked at Fairmont for many years until she retired. She apparently was a fantastic driver as in her commute to and from Fairmont she managed to survive repeatedly hitting deer, cattle, ditches and one dump truck. God truly blessed those drivers who shared a road with Jeannie. She was never deterred from working her shift though! Jeannie worked at Fairmont until she absolutely couldn’t do another day. Her final years there she relied on family and friends to take her to and from her job as her sight was diminished but she never let her waning health keep her from working. She teased that her final wishes were to have part of her cremains spread in the elevator at Fairmont. Watch your step!?

Jeannie was proceeded in death by her parents and brothers John and Dave. She is survived by her son Bo (Dawn) and their children Haley, David, Dillon, Delaney, Kevin, Kaitlin, Joseph and Christian. Her daughter Vikki (Shane Lidstrom) and their daughter Maggie. Her sister Kathy and brothers Jim (Rosie), Marvin (Jill), Tim, Fred, Jimmy John (Michelle) and Rob (Judi) and sisters-in-law Sandy and Mary.

Out of respect for her wishes there will be no services held. She asked that you take a few minutes out of your day to hug one another and spend time with your precious loved ones in memory of her.

Donations can be made to Pintler Hospice in Jeannie’s name at 401 Pennsylvania, Anaconda, Mt 59711.

Please visit below to offer a condolence or share a memory of Jeannie.

Axelson Funeral and Cremation Services has been privileged to care for Jeannie and her family.