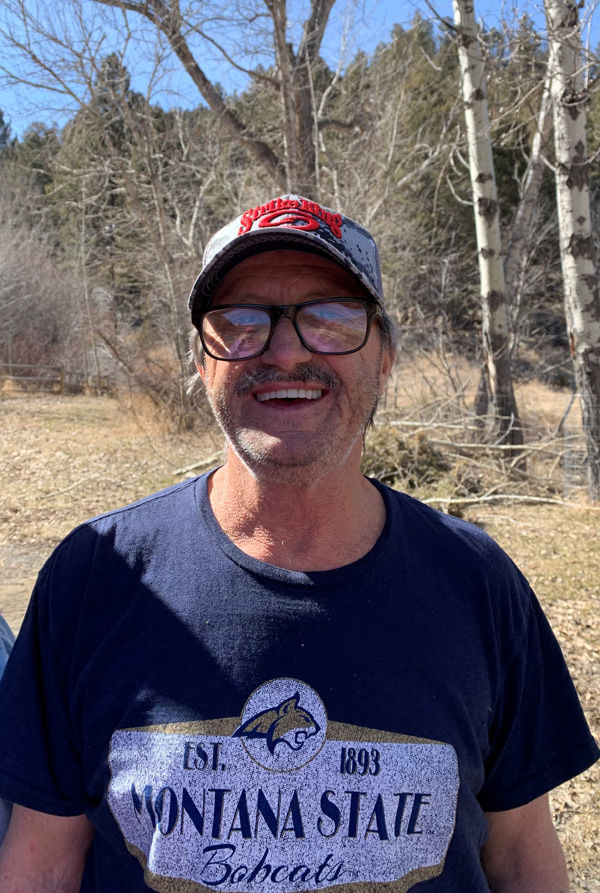 On the morning of December 2, 2023 our precious Bill’s heart beat for the last time. After the fight of his life in the ICU, with his wife by his side, he lost the battle with grace and dignity at St. James Hospital in Butte, MT. Bill had just celebrated his 60th birthday at his time of death.

Bill was born in Butte America on October 5, 1962. He was a proud Butte boy and shared his pride generously.  Bill was the 2nd son and 4th born child to Marilyn Johnson and Wallace Lochrie. Marilyn remarried “Packey” whom was a longtime stepfather to Bill.

Bill had a childhood full of adventure and adversity…of what he would call “shenanigan’s”. He told tall tales of elaborate forts in the abandoned mine shafts, pulling pranks on the neighborhood with friends, of building crazy cars out of found parts and creating general mischief throughout his youth. A childhood well lived!

As a teen Bill “was forced” to spend most of his summers at Canyon Ferry Lake with Grandma Martha and Grandpa Connie. This magical little cabin touched Bill’s spirit beyond measure. The lessons of hard work and enjoying all life has to offer as the reward were never forgotten by him and until his last day were held closest to his heart. We are so grateful for all of the amazing memories our family has made at one of Montana’s most beautiful lakes because of Bill’s love of this place. A lake life well lived!

As a young man Bill married Gina and raised a young family while he, “chased the oil fields”. He often spoke of the vast eerie nature of the Bering Strait and half-jokingly would say, “I learned to stay away from the red holes in the ice so the polar bear wouldn’t eat me”. Distance doesn’t always make the heart grow fonder, as Bill and Gina divorced about 10 years later. This lost love did not change his love for Ian or Jessica as he cherished his children, always. Another chapter of life well lived!

Bill returned to Butte and began to work at various construction jobs and landed at Pegasus Gold mine as an equipment operator. He continued to work for Pegasus until they closed in the 90’s. He was no stranger to hard work. He spent most of his life doing manual labor trades to earn a living and always wanted his children to have an easier life. He used to say, “use your head instead of your muscles and back because your body is weaker than your mind”. A hard life well lived!

In 2001 Bill asked the new neighbor girl on a date to (you guessed it) Canyon Ferry Lake and she skeptically said yes. On that date both of their futures changed forever, and they would go on to marry as soulmates on February 14, 2003. They would be each other’s better half, ride or die, best friends and companions for the next 20 years, until his last heart’s beat. During these years this kind man would raise three wonderful children with April. Bill was the only Dad that Ellen and Seth would ever know or love and to everyone’s surprise Gabe “the baby” was born after 5 years of marriage. A family life well lived!

“If love could have saved you, you would have lived forever”. There are no words that could possibly encapsulate Bill’s spirit, but a life well lived with love, laughter, hard work, western movies, simplicity, and generosity come to mind. These gifts he enthusiastically shared with everyone he encountered. Bill was the kind of guy that volunteered as a fireman and Special Olympics. The kind of guy that would pull over along the side of the interstate to offer assistance to change a flat or offer a ride. The kind of a guy that would shovel the elderly neighbor’s driveway and wave at and hold the door for strangers. He was the kind of guy that wouldn’t make a fuss when his wife forgot an ingredient on the shopping list and he had to return to the store (this happened way too often too). His spirit never wavered, and his kindness will never go unappreciated! Nothing but “cool grass” now my sweet “little Bill” …you’ve earned it! We will see you “at the lake” and thank you for sharing your life with us, a life well lived.

Bill was preceded in death by his father, Wallace Lochrie, his mother in-law, Madaline Nelson-Lowe, his father in-law Gary Lowe, his cousin Robbie Lochrie, and his nephew who was born sleeping, Andrew Sampson.

A celebration of life event will be held on February 17, 2023 at 2:00 PM at the McQueen Club in Butte to honor Bill. Please come and celebrate a life well lived with family and friends.

The family would like to thank our Community Hospital of Anaconda family for such amazing support during this difficult time. Also, St. James doctors, nurses and staff for the exceptional care and kindness they provided to our Bill. Finally, ALL the friends and family who have cradled us in their loving arms. We truly are blessed.

Please visit below to leave a condolence or share a memory of Bill.