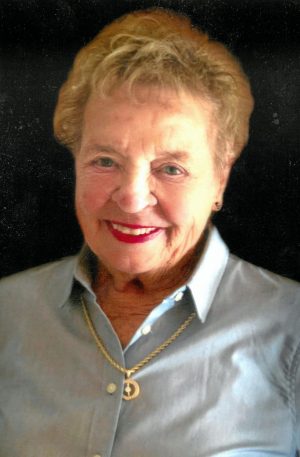 Betty Joyce Borchers passed away on January 6, 2020 peacefully at her home in Butte, exactly 4 weeks after being diagnosed with metastatic pancreatic cancer.

Betty was born to Lilly and Ralph Elkin in Centralia, Missouri on June 11, 1930.  The family soon moved to nearby Columbia, Missouri.  She graduated from Hickman High School in 1948 and was married to Curtis Black in 1949.  They had two children together, Greg and Linda, and divorced about a decade later.  Betty worked some as a dental hygienist, then as a secretary along with being a homemaker during those years.

Opting for a change, Betty applied for a hostess/cashier position at the Howard Johnson’s Restaurant in Columbia.  She was hired by the handsome assistant manager, John Borchers. They soon started dating (this was the early 1960s after all), and they were married in February 1963.  From that time forward, Betty and John were inseparable, working together and spending almost all their free time together.

In 1965, John was offered the opportunity to lease the restaurant and bar at the new Holiday Inn being built in Butte.  He and Betty flew to Butte to investigate the facility and the town.  After mulling it over, they decided to leave their families in Missouri and head west for this opportunity to work for themselves.  The family arrived in Butte at night on New Year’s Eve 1965, observing the twinkling lights of Butte from Harding Way as they approached their new home.  They lived at the Mile-High Motel for almost 3 months as their house was being completed.

Betty and John built the restaurant, banquet, and bar businesses into successful operations through John’s restaurant knowledge and their mutual hard work and dedication, as they were open 20 hours a day, every day.  Betty found her niche by being the face of the operation, greeting customers, and supervising the front end of their business.  She was blessed with a warm and friendly smile and outgoing personality which suited her well in those pursuits.

In 1973, Ramada Inn suddenly terminated their lease, and Betty and John were faced with an uncertain future.  They opted not to pursue running another full-service restaurant.  Instead, they bought and remodeled an old house on Harrison Avenue and started Butte Copper Company.  They also got a loan, bought an A&W franchise and built the A&W on Amherst Street.  They later bought a corner retail location and adjoining service station in West Yellowstone, expanding their gift shop business and learning the retail and wholesale petroleum business.  They also leased and operated a gift store business in Jackson Hole for over a decade.

As they got older, Betty and John began selling their businesses in Butte and West Yellowstone, holding on to Butte Copper Company for the longest time.  They started spending portions of their winter in the south, finally choosing Rancho Mirage. California as their desired location.  They purchased a condo where they spent almost 20 winters.  They enjoyed the winter desert lifestyle, playing golf, starting cocktail hour at 4 p.m., and enjoying the restaurants in the Coachella Valley.  They made many great snowbird friends in the desert, adding to their lifetime collection of friends in Butte and all over Montana.

Along with John, Betty was involved in the Butte Chamber of Commerce, the Montana Chamber of Commerce and the Butte Exchange Club.  They were members of the Butte Country Club for over 50 years.  Betty loved getting all dressed up and going dining and dancing with John as members of the Continental Club.  She was an active member of P.E.O. Chapter G in Butte and was thrilled to attend the state convention in Billings last year to be recognized as a 50-year member.

One of the greatest things that ever happened to Betty was when her children finally settled down, got married and had children, even though they took their sweet time in doing so.  She was exceedingly proud of her grandchildren and would glowingly brag about them to anyone willing to listen.  She always tried to make their birthdays and holidays special for them.

Betty was predeceased by her parents, brother and sister in Missouri and by her husband John in Butte.  Betty continued to live in their condo following John’s death.  She was comfortable living there and was fiercely independent in doing so.  She was always looking for dining and other social opportunities, as she loved talking to and interacting with people.

Betty remained upbeat and positive in the face of her cancer diagnosis, noting that she had lived 89 and a half years with good health and with her wits intact.  She remarked often that she had lived a most fortunate life and was able to do and see things that she never could have dreamed of being raised during the Depression and World War II. She summed it up by saying, “Not bad for a poor country girl from mid-Missouri!”

Betty is survived by her daughter and son-in-law Linda and Bob Larson of La Crescent, Minnesota, her son and daughter-in-law Greg Black and Ann Wayrynen of Butte, and her sister-in-law Arline Borchers of Marshall, Missouri.  She leaves behind her grandchildren Mitchell Black (attending school in Corvallis, Oregon), Margeaux Black (attending school in Denver), Jacob Clements of Silverthorne, Colorado, Curtis Black of Seattle, and Maggie (Thomas) Luers of Billings.

Betty and her family greatly appreciate and give special thanks to Raquel Correa of Family Cares, who provided expert nursing and personal care during her last weeks and the staff of Senior Solutions Hospice for their comfort and care provided during her final days.

Memorials are suggested to Mariah’s Challenge, the Mother Lode Theater, or to a charity of the donor’s choice.

A celebration of Betty’s wonderful life will be held at 4:00 p.m. on Saturday, January 18, at Butte Country Club.

Please see below to offer the family a condolence or to share a memory of Betty. Axelson Funeral and Cremation Services has been privileged to care for Betty and her family.