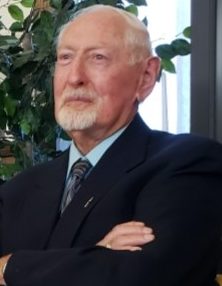 Ben Friez, known to family and friends as ‘Gentle Ben’, passed away from natural causes on September 20, 2020 with his son and wife at his side. He was 86 years old.

Ben was born on October 30, 1933 in Dodge, North Dakota to Raymond and Magdalen (Bleile) Friez. While Ben and his siblings were young, the family relocated to Anaconda, Montana where they spent their childhood. He later enlisted in the Navy with his brother George, where he served for four years.
After leaving the service, Ben returned to Anaconda and married Dorothy Smollack on September 13, 1958. They had two children, Benny and Chuck. He went on to work at the Anaconda Smelter and B.A.P Railroad for over 35 years.

A kind and loving man, Ben dedicated a significant amount of his time to caring for and helping others within his family and the community, including his brother Martin, who resided at The Hearthstone care facility where he worked.

Ben was an active member of the Anaconda Catholic Community, a Grand Knight of the Knights of Columbus, and belonged to the Elks and the American Legion. He enjoyed spending his time going fishing, hunting, camping, and playing poker with friends and his son Chuck.

He is survived by Dorothy, his wife of 62 years, his son Chuck, daughter-in-law Konnie, and granddaughter Shanina (Sean Devitt), as well as Jase McKay and Kylar Gochanour who lovingly refer to him as ‘Papa Ben’. He is also survived by numerous nephews, nieces, and cousins, his sister-in-law Donna Herbolich, and brother-in-law Bill Converse.

The funeral will be held at a later date, and details will be published once available.

Please visit below to offer a condolence or share a memory of Ben. Axelson Funeral and Cremation Services has been privileged to care for Ben and his family.